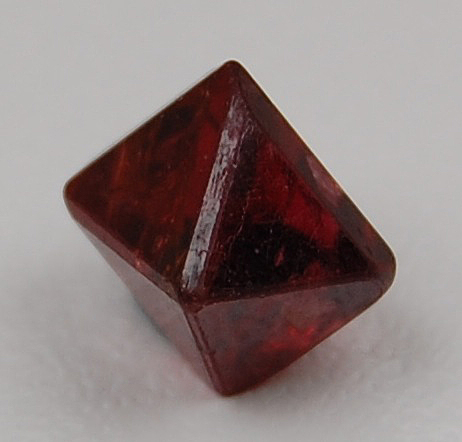 Introduction: Spinel is a mineral species of the Spinel Group. There is a solid solution series between spinel and gahnite. Refractive index and specific gravity both vary as chemistry changes.

Clarity: Spinel is a Type II clarity gemstone. Gems of this type typically grow with some minor inclusions in nature that may be eye visible but usually are well hidden or require magnification. Minute octahedral crystals sometimes in “fingerprint” patterns are commonly seen inclusions. Also characteristic are iron-stained films and feathers, zircon inclusions with halos and negative crystals.

Stone Sizes: Some spinels have been cut as large as 70 including a 71.5 ct red spinel from Sri Lanka at the American Museum of Natural History. Most gem spinels in the today’s market are less than 10 ct.

Localities:
-Burma: source of fine material from the gem gravels often in well formed octahedra; Burmese reds are well known and prized.
-Sri Lanka: often found in water worn pebbles in a wide variety of colors, escpecially pinks and blues; the rare cobalt spinel which is the color of a Noxzema cream jar is unique to Sri Lanka. In the above picture, the cobalt spinel is pictured in the front row, far left
-Tajikistan: source of tremendous red and pink spinels from the Kuh-i-Lal Mine in the Pamir Mountains.
-Tanzania: Recent finds of fine gem spinel have reinvigorated interest in the gem.
-Cambodia, Thailand

Name: The name spinel is of doubtful origin; it may come from the Latin spina (little thorn), alluding to spine shaped crystals, but this is not a common habit for spinel. It may also come from the Greek spinter, meaning spark.