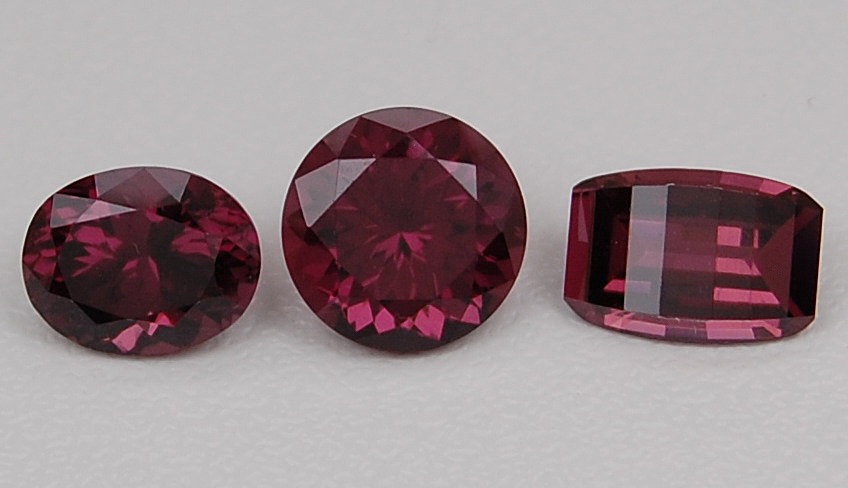 Introduction: Rhodolite is a variety of the solid solution series pyrope-almandine species. It has a ratio of Mg to Fe of 2 to 1 (i.e. 2 pyrope+1almandine)

Colors: light to dark purplish-red through reddish-purple. Umbalite is a name occasionally used to describe a rhodolite that is lighter in tone from the Umba region of Tanzania. In the trade, the name
rhodolite is loosely applied to purple or purplish garnets regardless of their properties.

Clarity: Rhodolite garnets are of clarity Type II. Gems in this type typically grow with some minor inclusions in nature that may be eye visible but usually are well hidden or require magnification. Needlelike
crystals, zircon crystals with strain halos and irregular, rounded crystals of low relief are commonly seen under magnification.

Stone Sizes: The discovery of rhodolite as clean, water worn pebbles in East Africa in the last 20 years or so has dramatically increased available sizes, some up to 100 ct. Fifty carat rhodolites are not
uncommon but most of the gems in the trade are less than 20 ct.

Name: Rhodolite is from the Greek rhodon in allusion to it’s color.

Care: Ultrasonics are usually safe. Steam cleaners should never be used. The safest method for cleaning is with warm soapy water. Abrupt temperature changes will likely cause fracturing.