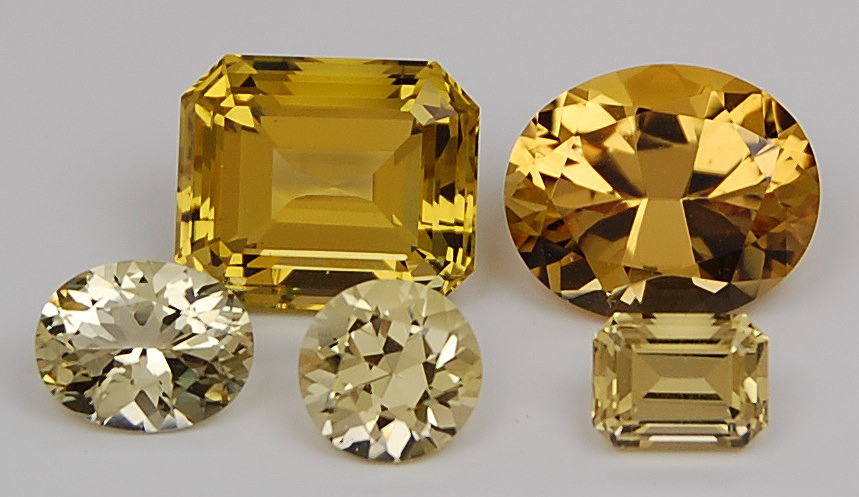 Introduction:  Golden beryl is a variety of the beryl species. The etched crystal in the left photo is from Volodarsk-Volynsk, Ukraine.  The faceted gems in the back row are from Brazil and weigh (left to right) 7.91 ct and 6.26 ct.  In the front row, the stones weigh (left to right) 1.56 ct, 1.55ct and 1.43 ct.

Colors:  Greenish-yellow to orangey or yellowish-brown.  Alternate names are yellow beryl or heliodor.

Clarity:  Golden beryl has Type II clarity.  Gems in this type typically grow with some minor inclusions in nature that may be eye visible but usually are well hidden or require magnification.  Typical inclusions are long hollow tubes.  If these tubes are properly oriented when cutting en cabochon, it will display a cat’s eye.

Stone Sizes:  Golden beryl usually does not form in large crystals like aquamarine although some localities have yielded rough to cut stones in excess of 100 carats.  Typical sizes for golden beryl are less than 20 carats.

Localities:  Golden beryl is found in several worldwide localities.  Some of the better known sources are:

-Ukraine:  Large etched single crystals were found for a window of time during the 1990’s capable of cutting stones in excess of 100 carats.  This material was natural and untreated. (Photo above left)

-United States:  There are just a few states that produce golden beryl.  New Hampshire and Connecticut are probably the better known U.S localities although neither state produces commercial quantities.

Treatments:
-Irradiation (R) is done to convert any ferrous iron to ferric iron which imparts the yellow or golden color to this variety of beryl.  Similarly, irradiation can be done on the colorless variety of beryl known as goshenite with the same resulting yellow color  This treatment is routinely done and is stable except at temperatures over 250 C.  The treatment is undetectable but assumed in all golden beryls.  The golden beryls or heliodors of the Ukraine are untreated but unfortunately cannot be confirmed as such by any lab test.

-Cause of Color:  Iron

-Cleavage:  Indistinct in one direction and almost never seen.

Name:  Golden or yellow beryl is simply a color variety of the species.  Heliodor is from the Greek, helios (sun), in allusion to the yellow color.

Care:  The ultrasonic and steam cleaner are generally safe unless the gem has liquid inclusions.  Warm, soapy water is always safe.